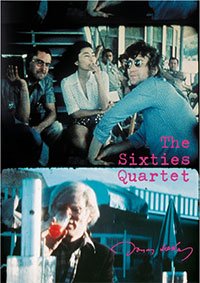 SCENES FROM THE LIFE Of ANDY WARHOL: FRIENDSHIPS AND INTERSECTIONS, 1990, 35’

Jonas Mekas is know for his rapid-fire diary films. his Scenes from the Life chronicles not only andy warhol, but also the social and cultural excitement that swirled around him, throbbing to a hypnotic Velvet Underground beat.

“Bits of Fluxus events and performances, and picnics with friends (almus, andy warhol, John Lennon, yoko ono, etc.), George’s wedding and footage I took of him in Boston hospital three days before he died.” -J.M.

“On october 9th, 1972, half of the music world gathered in Syracuse, N.y., to celebrate the opening of John Lennon/yoko ono Fluxus show, designed by George Maciunas. Same day, a smaller group gathered in a local hotel room to celebrate John’s birthday.”
J.M.

THIS SIDE OF PARADISE, 1999, 35’ wIth JACKIE, CAROLINE AND JOHN KENNEDY JR

I had the fortune to spend some time, mostly during the summers, with Jackie Kennedy’s and her sister Lee Radziwill’s families and children. Cinema was an integral, inseparable, as a matter of fact, a key part of our friendship. - J.M.