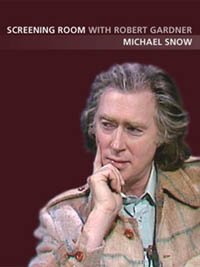 "Michael Snow is the dean of structural filmmakers. Whereas the three earlier fims Ñ Wavelength, Back and Forth, and La Région CentraleÑpropose modes of camera movement as modes of cognition, Rameau's Nephew explores the whole human body as a field of epistemological inquiry. Speaking, focusing, singing, urinating, laughing, reading, whistling, flatulating, eating, hand tapping, and fornicating are chief among the types of bodily activity and noise heard and discussed in the film." –P. Adams Sitney
Canadian Michael Snow has worked in painting, sculpture, and music as well as film, where he has proved one of the most renowned and influential of all experimental filmmakers. He played a major role in the "structural" film movement with such works as Wavelength (1967), Back and Forth (1969), and La Région Centrale (1971), exploring the world through deliberate and explicit decisions about formal approaches. Snow has been honored with solo exhibitions or film retrospectives at the Venice Biennale, New York's Museum of Modern Art, the Paris Centre Pompidou and Cinémathèque Française, and elsewhere.

About the Screening Room series

In the early 1970s a group of idealistic artists, lawyers, doctors and teachers saw an opportunity to change commercial television in Boston and the surrounding area. It would require years of litigation up to and including the Supreme Court, but the case was won and the Channel 5 license was given to WCVB-TV. Screening Room was one of several programs offered in an effort to provide alternative television viewing. The idea behind Screening Room was to give independent filmmakers an opportunity to discuss their work and show it to a large urban audience. Nearly 100 ninety-minute programs were produced and aired between 1973 and 1980.

Screening Room was developed and hosted by filmmaker Robert Gardner, who at the time, was Director of Harvard's Visual Arts Center and Chairman of its Visual and Environmental Studies Department. His own films include Dead Birds (1964), and Forest of Bliss (1986).